Jim and I have been watching Doctor Who, which is great.

Floppy cute British boys running around solving mysteries and saving the day, what’s not to like?

We’ve been watching New Who, I should say, the revival, the one that started in 2005 and has been traipsing around since then with it’s fancy production values, casting British heartthrobs and becoming a phenomenon and being silly but also, you know, totally heartbreaking. The best description, actually, of the combination of silliness and heartwrenching, is from Glen Wheldon, who described how goofy and wacky it is and that, also, sometimes it makes you want to lock your heart away in a box. To keep it from getting hurt again, I mean. Heart in a box!

It is totally acceptable to only watch the revival. Expected, even. Doctor Who was on for 26 seasons before it went away (and came back). That’s ages! 789 episodes, some of which don’t even like, exist in the watchable world anymore. And then there are radio dramas and novelizations and comic books and like, who even knows. Watching all of it…well, that’s just crazy.

And yet. I have this completist instinct, this desire to have finished a thing. It is hard for me not to start on book 1, episode 001, issue 0. And I have to finish it. I’m a bitter-ender, it’s in my nature. One of the best things about dating Jim is he is an early-dropper, and it balances me out. I stopped watching HIMYM, and I feel better for it!

No disrespect, HIMYM! Your first three seasons are still gold!

Doctor Who, though…it’s calling up these instincts, this part of my brain that says, “Seven hundred episodes isn’t that many.” “You can totally do it. What else are the hours of your life taken up with?” I find myself on the wiki pages, looking up histories and character names and thinking hey, wouldn’t it be cool if I knew this stuff, if I had seen all the episodes that reference it and I was an expert?

This is the same part of my brain that tells me I can’t skip episodes two and three of a 100-episode podcast, even if they are only 8 minutes long and it’s not consecutive anyway. It’s the part that says that I really must read the newest Lemony Snicket book, despite the fact that I stil lhavent read the last two of his main series. Doctor Who is so long, so intricate, so expansive and capable of going completely overboard on…it speaks to all these instincts, for better or worse. 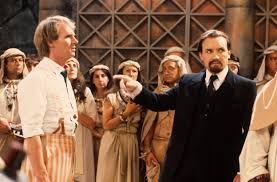 Planet of Fire is only 100 something minutes long, you can do it whenever!

For worse, mostly. I’ve been watching one Classic Who episode for like, the past week. It is slow going. It’s like all the same things happen as in the new show, but slower, and with less whimsy. I…probably don’t need to do this. Luckily my inability to get anything done acts as a fairly firm countermeasure to wanting to do way more than I possibly can.

This entry was posted in tee vee, Thinking About My life and tagged british TV, completist, Doctor Who, How I Met Your Mother. Bookmark the permalink.