Some thoughts on “Bedrock”, two years after it’s release

This song came on my iPod the other day, and you know it is still killer. (By the way I realized the other day that the end of the year is coming and best of lists are coming and I’ve…downloaded the new LMFAO album, and that’s about it. So I’m going on a big download spree in the next few days; if there’s anything you think I should listen to so I can put it on my best of list in like, February, lemme know in the comments).

Anyway “Bed Rock” holds up better than a lot of party jams from years past, especially one with such a ridiculous hook. (Jim says he was famous in 4th grade for telling that Flinstones joke. Go, Jim). Maybe it’s that it’s all hook, and that sort of creamy Lloyd voice plus that super catchy little repeating synth line. Also, the video remains just like, amazingly delightful.

For instance, this guy.

I guess it is a concept video, right? And the concept is “Real World,” but with the members of Young Money, so they are all just hanging out in a house looking like they are having a great time, and also, they filmed a video while they were there, and have occasional touches that make it seem like we’re on the Real World, like the names and the random dude who has a boom mike (above). It’s a posse cut that someone decided to film as just that, a posse, hanging out, in a house. (Do you think that Kanye made the G.O.O.D. Friday songs because he wanted his own posse/label/brand like Weezy has?)

Shanell, apparently. What happened to her?

I also remember this as being one of the first times that I saw Nicki Minaj, and Drake, too. Which is fun to think about, now that we have much more about them to go on and more complex relationships with them both.

I totally fell in love with Nicki like the second I heard her voice on this song. She just sounds so different than almost anything else I’d heard before. I still love ‘he pressing me like button downs on Friday night” even though that’s not even that good a line, and “he prollly right” isn’t even a line but it’s so fantastic. It’s funny because I can’t think of anything else where she uses that little girl bubble gum voice, since then, and I still really like it. The outfit that she’s going with…less so, though she still totally steals the song.

I also like that there is this whole house full of posse, people running around the hallways and jumping in pools, and then Nicki and Drake, doing their own thing in their own rooms, and occasionally yelling at each other. Did they actually date? Or are they just friends because they are so clearly the best members of YM (Wayne excepted, of course).

I also fell hard for Drake in this video, and I think smug, funny, cocky Drake remains my favorite. There hasn’t been a lot of cheeky Drake (literally – look at that big grin) in a while. While I am drowning in Take Care, which is great and all, I keep being like wait, where’s adorable Drake? Funny Drake? That little hand-motion he makes at “I’m not just anybody,” or how he falls off his pool chair at the end? Most anybody can do the regular, heavyset rapping Drake does, but very few rappers can do the adorable Jewish nerd like Drake does, and really I think I want more of that.

Come on, how cute is he!

It’s also impressive that this song remains so awesome when the Gudda and Millz verses are so very terrible. “And I got – Grocery bag!” What does that mean, man? It’s nice to have the whole lineup playing at once, so we can really see who is worthwhile and who is not.

And what is up with Tyga these days (in his tiger pants)? He is not entirely MVP here, although I find myself saying “I’m too loyal, and too focused, to be losing, or be hopeless,” like, all the time (and not just when I’m talking about disseminating naked photos of taken of my paramours). He was pretty awesome in “Roger That”, and he misses being MVP there only because Nicki makes those hilarious hand gestures at “flow tighter than a dick in a butt,” so you still know exactly what she’s saying even as they bleep it out. Tyga also looks awesome in “Roger That”. The gas mask with those tattoos? Sweet.

About a year ago the owner of the company that owns mine sent around an email asking what our favorite brands were, and I said Coke, Google (this was last year!) and Lil Wayne. 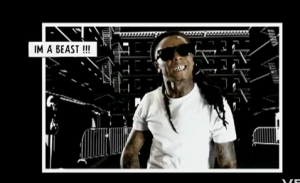 Direct quote from the email I wrote: “Because I like him so much, I’m more likely to like people who he deems as worthwhile – rappers on the Young Money label, people who’s songs he guests on. And I love Nicki Minaj and Drake, who are his proteges.”

Well played, Young Money. I be stuck to you like glue.

4 Responses to Some thoughts on “Bedrock”, two years after it’s release