The Pinkest of Fridays

Posted on December 6, 2010 by Neon Apologist 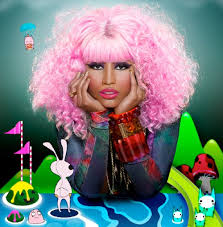 That first song is such a total jam, such a struttin’-in-high heeled-boots song, that it took a while before I realized that, and it kills me to type this, its not a home run of an album. It has some great stuff, definitely, (is it terrible that I really like the “Video Killed the Radio Star”-violating will.i.am song?) but it drags. It has too many slow songs, and it just doesn’t hae enough of what makes Nicki great – her raunchiness, her wildness, her sexy clever weird shit-stompin rhymes, that weird thing she does when her voice gets all low and she bites out the syllables…her Nicki-ness, you know?

I do try not to write feminist rants about pop culture, but this almost seems like a …girlier album than it needs to be? A lot of the songs are inspirational, but not in the ‘I made it‘ vein, more the ‘I believed in myself and now I can fly!’ kind of thing. She raps about feeling out of it and lost, a lot, and does this complicated song that is written as a letter to …herself? Its weird.

The difference is that old Nicki had consistently colored hair, I think.

There are a lot of feelings. But, you know, that is hip hop lately, as I was going to write in the blog post about “Thank Me Later” that I never got around to. And I’m ok with feelings – I love Drake – but the problem here is that it doesn’t quite seem like her. The rappers I tend to love are the ones with a personality I am interesting in hanging out with (more on that some other time), and here, everything seems a little sappy, a little too pink (too pink in a gauzy, Bath & Body Works lotion kind of way, not in a Harajuku Barbie way), a little too introspective and ‘you-go-girl’-y.

Where’s the Nicki of “Roger That,” the Nicki who managed to say “I really like your kitty cat and if you let me touch her…” on mainstream radio, and get it played like a billion times? Its not that Nicki isn’t entitled to have feelings, I just think she could do something more interesting with them than yelling with Eminem about dragons and his ex-wife (AGAIN).

Its almost as if she had to sand down her edges, make a ‘girl’ album. I try not to think too much about how the single that ‘broke’ her wasn’t the (admittedly kind of shitty) shit-stomp of “Massive Attack,” but instead the sugar-coated, smoopy swooshy, boy-crazy (not to mention repetitive) “Your Love,” which Nicki herself has said she didn’t like. I think part of what I loved about Nicki as a “female rapper,” as opposed to just an awesome artist, was that she didn’t talk about herself as a girl around the other guys, or about how much the boys love her. Even Lil’ Kim’s diss track has a line about how much the thugs love her, which I can just imagine makes Nicki roll her eyes. Nicki is an exciting girl rapper because she’s just a rapper, who, as they say, happens to wear pink. “Pink Friday” put the pink first.

Still an awesome costume for Jewish Halloween though!

I still think she’s great, but I’m gonna stick with “Monster,” and with “I’m The Best” on repeat.

3 Responses to The Pinkest of Fridays