“The Hunger Games” inspires some unwieldy metaphors in me!

The Hunger Games! I read it!

This book – man, it is like not even worth dissecting. This thing just steamrolls you. You might as well ask whether, like, MJ sounds are well made, or, like, was Star Wars a coherent story, or are the drinks at Rocket Bar good (Ok that is not a good analogy, but its my new thing to use bars as analogies and i’ve been going nuts with it. I cant believe I never used this before – HIMYM is Chief Ike’s! True Blood is Little Miss Whiskey’s! Glee is Sign of the Whale! [Sign of the Whale has hilarious music on their website!] This is great!)

The point is, some things just knock you down and take you out and you are powerless to resist (Rocket Bar does not quite do that). The Hunger Games is totally like that. All the adjectives that go with it are like “crackerjack,” or “dynamite.” Unstoppable. This book is great.

Its hard to think of pictures for a post about a book.

Its a clever book, in that its one of those works of art that are about something cruel and terrible but utterly watchable, wherein you can enjoy the slaughtering of children, even as the reader keeps the moral high ground. See the book is about this competition – the Hunger Games (oh, hey!) – in this futuristic dystopia where teenagers (sexy teenagers!) are sent into this big arena to fight to the death. And of course the whole book is about how nasty and awful and terrible and tyrannical this game is, but, dude, this is also a book where 24 children fight to the death, and the main character tries to win, and you can root for her and keep track of who is left and what skills they have and stuff, and it is completey fun.

This makes it all sound very crafty and sly, which is not totally my intention. Katniss, the main character first person narrator who turns out to be great at Hunger Gaming and fun to root for, is awesome – she’s like a feisty 16-year-old version of a lone cowboy gunslinger, wounded and terse and sexy. Plus its got this delicious Twilightian love triangle that is gonna be developed more in the second book (presumably – its sitting, unopened, on my night table. In HARDCOVER). Its an awesome love story, tacked on to an awesome adventure story, with the moralistic underpinnings of an awesome revolution/uprising/rebel against the evil overlords story. 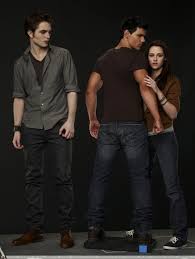 It was so clever, and so well crafted, and so…well, crafty, that I almost felt sort of…manipulated? I had to keep pulling myself away during the last 150 pages or so, taking breaks to wash dishes or shop for robot necklaces on on eBay or something silly like that, just to regain my control. I can barely remember a lot of the specifics, just a feeling of constant onrushing urgency. When I think about some things (the sloooow unveiling of the love interest, the heartstring-tugging little girls), I can sort of tell that they are shoddy, not quite put together well, a little cliche, but it barely registers as the story hurtles around you. Some of the parts might be a little secondhand, but damn is the car fast.

5 Responses to “The Hunger Games” inspires some unwieldy metaphors in me!