Posted on November 3, 2010 by Neon Apologist

“Mark Zuckerberg, defining our relationships” my friend Dylan said when I showed him the new “See Friendship” button on Facebook.

But then he, too, spent several perfectly usable minutes floating around Facebook, seeing what picture MZ’s algorithm’s had picked as the one that perfectly expressed his communications with friends from high school, roommates, cousins.

Its a useful new feature – it consolidates how you use facebook with people, so you’re response to a picture comment gets noted, and you can know exactly who to get mad at for not coming to your party.

Until now, this is how I consolidated friendships.

But everyone is actually spending hours not for that, but for the picture – how does Facebook sum up my relationshp? What is the image that really says something about who we are, as a unit? And when they are funny or particularly appropriate, its great. When they aren’t, its boring, and when there’s no picture, just the weird little icon of a generic boy(s) or girl(s) – well, then you’re hardly friends at all, right?

Its kind of incredible how many of these screencaps are floating around Google Image...

Its a fake, arbitrary summary, but we want to know it anyway. It’s the movie poster tagline version of who we are. Its a snapshot that allows us to see ourselves from the outside, like we see the characters on TV, a layer of artifice on top of our lives, coloring what we see, filtering it through the years and years of footage we’ve already seen, actors impersonating real friends, showing us what being friends is. Its working in an office after years of having watched The Office, thinking, for a minute, that the guy who works in Accounting is named Oscar. 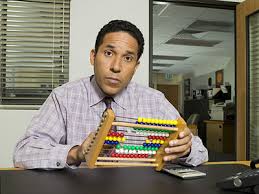 Does not actually work in my office.

I’ve written before about “meta-existence,” the “constant mediation of experience into information and information into broadcasts.” I was worried, but now I don’t necessarily think its a bad thing, or even a new thing. How can you possibly live in your head, all the time? You only live life once (ok now we’re just getting a little over-arching here, Shira), which is both comforting and supremely terrifying, when you think about it. How can you not want to try and live it a few times over, again, to practice by watching other people, to really analyze the people you’ve chosen to spend it with through the picture that Facebook pulls up for your Friendship?

One life with Saskia is never enough

As usual, I find myself apologizing for Mark Zuckerberg, since that’s what this blog really is (markzuckerbergapologist.wordpress.com). I like seeing Friendships. I like the choices the program makes. I look forward to seeing what picture comes up when I click on Anar, the man who actually works in my office’s Accounting.

This entry was posted in "social construct" is a social construct, Thinking About My life, webshit and tagged Dylan, facebook, grand pronouncements, Mark Zuckerberg, markzuckerbergapologist.wordpress.com, meta-existence, teh internets, The Office. Bookmark the permalink.