Things I am just not prepared to deal with yet:

The constantly-churning and increasingly insane Kanye Power Hour already exhausts me, and I have not yet found 34 minutes of my life to devote to this. But I will. I’m sure. Someday. And I’m sure it will be great.

After lots of doubting, it turns out I like The Awl, a lot. And I like women. And writing about women, and thinking about women’s issues, and stuff. But I am just not ready for another whole blog full of grouchiness at pretty pictures of Cameron Diaz, writing about music from yet another ‘different’ angle, and difficult conversations about female sexual agency. I don’t even read Jezebel.

Eventually I will get to you, Hairpin, and I’m sure you’ll be great!

3. Figuring out how I feel about “Adventureland”

"Adventureland" is a movie

We watched it a few nights ago, and I think I liked it? Or maybe I wanted to like it but the plot just totally fell apart, especially at the end. But the music was good! But it didnt really go anywhere, it was just sort of one long mood. But maybe that’s nice?

All I could really think about was that it had my two favorite actor crushes, kissing. 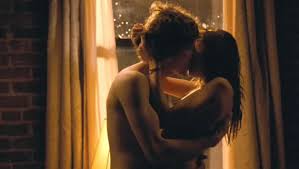 This picture actually makes it look sexier than it was

And so that was nice. I like them. And then I got to watch them both! Being cute!

“Adventureland,” I’m not sure you’re great, but I’m willing to give you the benefit of the doubt.

This entry was posted in Thinking About My life, Uncategorized, video killing the radio star, webshit, writing about writing and tagged Adventureland, Kanye West, the awl, the hairpin. Bookmark the permalink.

1 Response to Things I am just not prepared to deal with yet: