I hold you, I hold the sound

So I saw The Thermals last Friday. 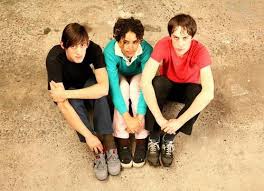 The Thermals are probably my  favorite punk band. What, they’re totally punk – short songs, most of which are composed of the same three notes,  which they bang out in a sort of yelping way. I wish I’d worn my Chucks. (I’m pretty sure the punks started wearing Chucks not as like a fashion thing, or even because they are cheap, but because they are pretty much the only shoes you can wear to a concert that protect you from getting stepped on, let you dance, and don’t melt your feet.)

Anyway, The Body The Blood The Machine is one of my all-time favorite albums. I saw The Thermals around when it came out, in 2007, and it was one of the best concerts I’ve ever been to – a heaving mass of kids jumping around, shouting all the words, inches away from the guitars. Super fun.

No matter how many pictures I post of them looking adorable!

The people around me were clearly much more excited about the Body Blood songs. I spent most of the concert trying to figure out why those songs are so much better. Are they just faster? More complicated? Better, weirder lyrics (“passing the corners we kissed in the rain/
passing these old rusted warning signs/what did they say?/I think they said, “run!””)? More jarring discrepancies between the guitar and keyboards?

I wonder how that album happened. The stuff before it and the stuff after it is good, but not transcendant. Its like something hit from above, some perfect storm of anger and guitars and great hair, and the result was something that remains fantastic, that pulls the concert back up when I was getting tired. Sometimes lightning only strikes once? 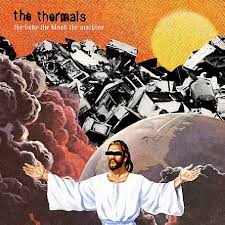 We ended up sitting in the back, until the encore, when they played “My Name is Jonas” (speaking of disappointing future albums!) I guess you really can’t go home again.

But oh my god “The Body The Blood The Machine” is so good. You should get it.

This entry was posted in Songs About Buildings and Food, Thinking About My life and tagged 'this is how I feel about growing up!' blog!, Chuck Taylors, concerts, discontent is so punk rock, The Thermals. Bookmark the permalink.