Sometimes I wonder whether you can know a star when you see them. Did the people who saw Jimi or James Brown or Madonna (or Zac Efron?) in tiny clubs and mediocre audiences know that they were witnessing the first effulgences of a supernova?

I saw Janelle Monáe open for Of Montreal last night (Of Montreal was great, obviously, and brought fish-men and a giant spacesuit and a 5 song encore, including 3 Michael Jackson songs, but that’s another post.) She killed it. Ever since I first saw her, I’ve thought that she had It, that I was witnessing the beginning of someone huge. She has the look and the moves and the power.

And the hair oh my god the hair

When I saw her for the first time last year, at the first show of her first headling tour, I thought she’d be so good, and even though she was an hour late and sort of fell apart, you sort of felt like it as there. And last night she brought it. 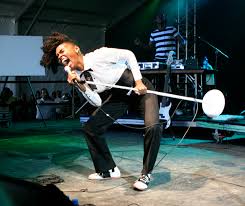 She makes me think of Prince, in that she seems to have come fully formed, an aesthetic all her own. She does her own thing. To a fault, maybe – do all of the videos projected behind her at her concert have to be of…her? Do all her tshirts have to just be her face? She looks fabulous (apparently that hair is called the Janelle) Her band looks great, looks like part of her thing. The picture on her first album was so perfect…

I saw it on a poster for a New Years party in Jerusalem, which she was not in any way involved with

I wonder if she’ll be as big as I think she can be. She’s clearly still finding her way; her determined visual aesthetic doesn’t quite extend through all her music yet. For example – she fades into the Of Montreal songs that she guests on, but the song that Kevin Barnes sings on her album just sounds like an Of Montreal song.

I'm so glad they're friends (friends?)

She wants to be a superstar but also be an artist, I think. Or maybe she’s not sure yet. It can be messy. But, at the end of her set, she did “Cold War” and the video screens were playing black and white videos of boxers with exploding stars overlaid on top. Right as one guy hit another and a firework went off, the tech guy faded the video into Janelle, in the middle of the explosion. She belted and the guitar feedback hit, and, dancing, looking neither at the audience nor her own video, she was a superstar. Right there.

This entry was posted in events horizon, Songs About Buildings and Food and tagged baby i'm a star, concerts, Janelle Monae, prognosticating. Bookmark the permalink.